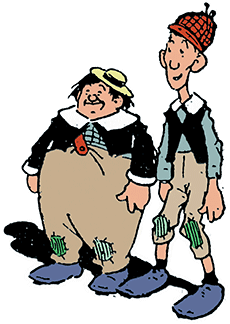 There are far more Artful Dodgers than Oliver Twists in the early comics. Although it is more than likely that Dickens’s novel encouraged the proliferation of young rogues and urchins in the comic strips, the main impulse would seem to have come from nineteenth-century German caricaturist Wilhelm Busch, whose “picture stories” (“Bildergeschichten”) were frequently reprinted in European comics without any mention of the original artist’s name. Examining the unauthorised reprints of his work in the popular magazines and comics of seven countries outside Germany and Austria, David Kunzle concluded that Busch’s oeuvre had been “mercilessly looted, chopped [and] fragmented” in Europe (Kunzle 1992: 105). This was certainly the case in Britain, where barefaced pilferings appeared in numerous cheap periodicals from 1869 to around 1900 (Carpenter 69; Kunzle 1990: 332–33). Some of Busch’s naughty boys (“böse Buben”) turn up singly in British comics – such as Mischievous Tom (“der kleine Pepi”) (Comic Life, 28 January 1899) – but more often than not his bad lads turn up in duos: the twosome that torment Diogenes; the little honey thieves; Paul and Peter (in “Plisch und Plum”); and, of course, Max and Moritz, the naughty schoolboys who stuff gunpowder into their teacher’s pipe – boom! (“Rums!!”). Max and Moritz were also certainly known to the German immigrants who had settled in New York, among them the young caricaturist Rudolph Dirks, who was commissioned to create The Katzenjammer Kids (later known as The Captain and the Kids) in 1897 at the behest of newspaper magnate W. R. Hearst (Horn 2: 252–53 and 4: 436–37). His twin brats Hans and Fritz appeared in Britain in The Big Budget in 1902–3, on at least one occasion as drawn by one “Richard Dirks” (The Big Budget, 13 June 1903); also in Comic Life in 1909–10, some of these strips re-drawn by George Davey (Comic Life, 31 July 1909). Derivative strips were to follow.

By this time, however, there were already home-grown young scamps a-plenty in the London-based comics, “bad boys”, “wicked boys”, or “naughty boys”. In the 1890s, they usually caused mayhem in duos: The Terrible Twins (1890), Mischievous Billy and Artful Jimmy (1894), The Boys (1896), Our Kids (1898), Those Terrible Twins (1898), The Twinkleton Twins (1899), plus many others, including the delinquent offspring of Weary Willie and Tired Tim, called Little Willy and Tiny Tim (1898), whose first escapade in print ends with a sound thrashing – “bang! flosh! cosh!” (The Funny Wonder, 9 July 1898). The first juvenile gang to be given regular cover-page space, The Ball’s Pond Banditti, appeared in Larks! in 1893. Soon, classes of undisciplined schoolboys entered the comics, whole schools in fact, where the unruly pupils typically engage in repeated warfare against their cane-wielding schoolmasters: Whackington School (1898), Dr. Swishem’s (1909), Dr. Caneem’s Academy (1910), and similar oppressive institutions. We have to smile at the cunning and ingenuity of these bad boys, grin at the wildness of their escapades, and nod in approval at their strong sense of friendship and solidarity against an inimical adult world. And this applies in equal measure to the Casey Court Kids. As envisioned in 1902 by their creator Julius Stafford Baker, the Casey Court Kids were a gang of poor, skinny, East End children in patched clothes and worn-out boots who enthusiastically embarked on outrageous but ultimately futile plans to earn a heap of money, under the leadership of one Billy Baggs (originally Billy Bangs). Individual creativity and group solidarity were firm values amongst these kids, as was cheerfulness in all circumstances. Casey Court was a single half-page panel, busy and cluttered, published on the back page of the comic Illustrated Chips, and evoking strong reader affection for many years, the series running week after week, fifty-two weeks a year, for over half a century.