In late 1914, battle in James Henderson’s Comic Life was jocular, thus reflecting the early presentation of the First World War in the popular press as “a schoolboy’s lark” or “a jaunty adventure” (Horrall 186). While fat tramps Butterball and Tall Thomas were gleefully bashing empty-headed Germans on the cover page of this comic, on the inside pages the enemy were faced with the combined farcical ingenuity of Wotto the War Artist, seaside clowns Pyjama Percy and Balmy Bill, and nutty inventor Scientific Silas. Perhaps in response to increasingly heavy war casualties from early 1915 on, one by one these and most of the other comic characters retreated from active involvement in the war so as to pursue their previous antics in scenarios set in the colonies or the East End of London. Soldiers were known to be readers of comics, bundles of comics and other magazines being shipped out free by the Post Office to “the boys in the trenches” (Pluck, 11 September 1915). Perhaps these fighting men objected to facetious takes on the reality of trench warfare, in all its “blood, mud and shit” as one young soldier put it (cit. Burder 30), preferring the humorous and escapist entertainment of old. Readers back home may well have felt the same way.

And then, suddenly, in the midst of this terrible war, a new generation of the popular old heroes emerged in the comics: tramps. After viewing a silent short starring Charlie Chaplin, artist Bertie Brown suggested a comic strip featuring that comedian’s screen persona to an Amalgamated Press editor. The year was 1915; acute “Chaplinitis” was afflicting the western world (McGuirk 87). Brown’s timely proposal was approved by the editor of The Funny Wonder, with the result that on 7 August 1915 a cover-page strip depicting the escapades of a tramp even more famous than the self-styled “world-famed tramps” (still running in Illustrated Chips) commenced what was to become an impressively lengthy run. For nearly thirty years Brown was to devise the plots of this series, drawing the panels and inventing the dialogue himself, but not writing the captions, however, these being provided by the office staff (Gifford 1989: 37). Other tramps soon followed, among them Lazy Leonard and Lively Laurence the Village Lads in The Firefly (1915) and Happy Hambone the Comical Tramp in The Funny Wonder (1917). Then a new direction was evidently sanctioned by comics editors, the introduction of “lady tramps”, Carrie the Girl Chaplin taking over the front page of Merry and Bright in 1917, while ‘Appy Ann the Lady Tramp began tramping in The Jester the same year.

Meanwhile, as the war raged on, the comics were splitting into two separate divisions. The black-ink comics basically retained their mixed-audience orientation, even if they did cater increasingly to early-teen readers, while the general-reader, colour-printed comics slowly transformed themselves into comics for young children. Comic Life, for instance, went coloured in 1909, remained mixed-audience for some years, became a boys’-comic-cum-story-paper by 1912, by early 1917 was increasingly beamed at an even younger audience, and by the summer of that year had completed its full metamorphosis into a young child’s comic, edited from 9 June 1917 onwards by one Uncle Funn. The Amalgamated Press, publisher of the popular children’s coloured comic Puck since 1904, decided to explore this market more thoroughly, their new, four-colour kids’ comics, The Rainbow and Chuckles, first seeing print in 1914. Further new titles followed after the armistice. Playtime was launched in 1919, followed by Tiger Tim’s Weekly and The Chicks’ Own; then Henderson’s Sparks was taken over by A.P. (and retitled Little Sparks), so that by early 1920 this still relatively new but already sizeable division of British comics had become firmly consolidated – “nursery comics”, comics not generally for children, but for young, including the youngest, children.

Note: Attribution of comic strips produced during the 1914–18 war to their artists is trickier than usual, as “duplicators” doubtless replaced some of the men away on active war-service. 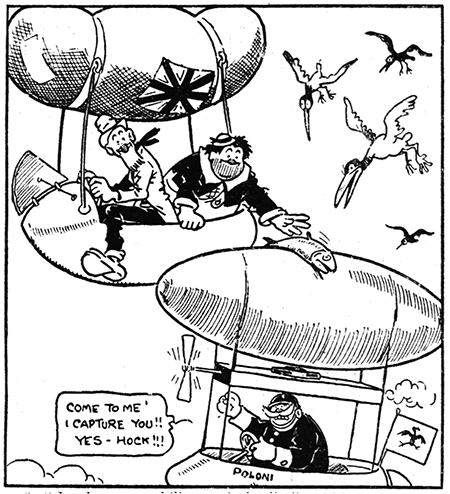 Weary Willie and Tired Tim about to puncture a Zeppelin – from a comic strip by Percy Cocking, 1914