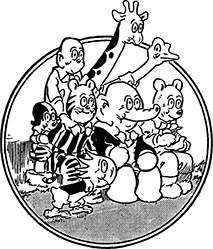 Tiger Tim and The Bruin Boys – adapted from a Playbox annual

A Rainbow sub-title in the 1930s, carefully preferring the safe word “paper” to the risky word “comic”, proudly proclaimed that it had become “The Paper for Home and Palace”, the “homes” being middle and upper-middle-class homes, the “palace” being Buckingham Palace, where the young princesses Elizabeth and Margaret were apparently keen Rainbow readers (Gifford 1975B: 8; Baker [2]). While the Amalgamated Press’s pioneering four-colour children’s comic Puck (1904) had proven that affluent parents were happy to spend more on good print and approved content for their young children’s entertainment, it was the huge popularity of the colour-printed comic The Rainbow (1914) that indicated how large the upmarket market for these “nursery comics” actually was. Once the First World War was over, the Amalgamated Press soon released a new range of colour-printed titles for well-off families, beginning with Tiger Tim’s Tales (1919), relaunched as Tiger Tim’s Weekly (1920), then Playtime (1919) and later Playbox (1925). In 1920, the Amalgamated Press also took over publisher James Henderson’s Sparks, changing its title to Little Sparks. For early and learning readers, they put out the nursery comic The Chicks’ Own (1920) followed by Tiny Tots (1927), both of which were printed throughout in hyphenated syllables as an aid to acquiring reading skills. Following price standardization in October 1922, the Amalgamated Press’s coloured comics sold for tuppence (2d) per 12-page copy, making them exactly twice as expensive as the same publisher’s juvenile “knockabout” comics (see section F). In the early 1920s, the Amalgamated Press also began issuing thick, colour-printed annuals to accompany their best-selling coloured comics, publishing them in time for the Christmas trade, while regularly printing the date of the following year on the title-pages and front covers. With prices ranging from three shillings and sixpence (Bubbles Annual) to six shillings (Playbox Annual), these annuals would have been well beyond most working-class families’ Christmas budgets.

“Jolly Pictures and Stories” plus “Jolly Jokes, Games, and Models” are regular running headlines in The Rainbow that briefly characterize the basic composition of the nursery comics. The “jolly” cover page of these comics was certainly not a place for rough slapstick and coarse language, but a home for harmless fun and mild mischief, a world where naughtiness invariably led to punishment, as order was finally restored by wise adult characters. There was no space for “bad boys”, who were replaced by mildly mischievous, well-dressed, walking, talking animals. For many years, The Rainbow featured a class of boarding school“boys” collectively known as The Bruin Boys, their names and anatomy revealing their animal species: Tiger Tim, Jumbo Elephant, Bobby Bruin, Georgie Giraffe, Willie Ostrich, Jacko Monkey, Porky-boy Pig, Fido Pup and Joey Parrot. First created by Julius S. Baker, the series was soon taken over by Herbert S. Foxwell, who also drew also key pages of Tiger Tim’s Weekly (1920), a comic which presented, as its very title suggests, the very same group of humanised animals. Meanwhile, Tiger Tim and friends’ twin sisters (The Hippo Girls) were to be found cavorting in the pages of Playbox (1925): Tiger Tilly, Baby Jumbo, Betty Bruin, Gertie Giraffe, Olive Ostrich, Jenny Jacko, Pearl Porky, Fifi the Pup and Polly Parrot. The artist, again, was H. S. Foxwell, who drew them until 1933, when he was suddenly poached by the newspaper The Daily Mail to develop their comic-strip character Teddy Tail (Clark 1998: 61). It was Foxwell’s massively popular Tiger Tim and The Bruin Boys and their derivatives, continued by other artists and spilling over into a handful of A.P. comics and annuals, that for decades elicited the strongest reader loyalty and, in the opinion of the Rainbow group editor Bill Fisher – and we can doubtless trust his judgement – became the biggest money-spinners to date in popular fiction (Baker [2]).